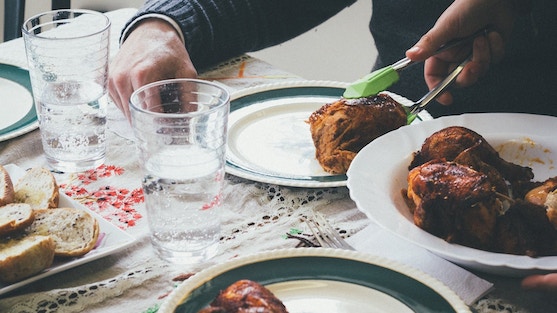 Many of us may refrain from doing good because we just don’t know where to start. The case of Sahr Ngungor is a perfect example that you just need to go for it!

Every month for the last two and a half years Sahr has planned and hosted an open meal with refugees, a project that he hoped would bring people together to celebrate Amsterdam’s diversity. The event grew and became home to 45 to 50 nationalities, and today Sahr never expects less than 100 people to show up. In a full house, guests are gifted with music, food and lots of good conversation.

The main idea behind the open meals is for everyone to bring a dish and enjoy good food alongside new people, including refugees. Sahr’s mission with the event differs from what many people assume the refugee cause entails. The gather doesn’t allow donations, and no other forms of help take place. The goal is for people to feel treated as equals, so that refugees are humanized, as they would in any other situation where meeting new people is involved.

“In a refugee’s situation, you are always in a process of people wanting to help you, people asking you what your problem is,” Sahr told us. “This is open meal with refugees, not for refugees.”

He explained that those in a refugee position struggle to meet people and network, so the open meals create a safe space that allows them to be comfortable enough to be themselves and feel included.

Sahr is also the founder of a charity called Diversity House, where other projects like the open meals come to life. One of them is Painting with Refugees, a similar concept with the intent of gathering people to promote diversity.

“For me as a human being, I love to see people coming together. That is very special to me.”

Someone who’s never been to the event can expect nothing but a “cultural surprise,” Sahr says. It is a chance for people to look at refugees as equals and for refugees to feel like an active part of their community.

Diversity House brings people together to celebrate their differences in events and activities where people can be themselves and share the best of their cultural diversity.