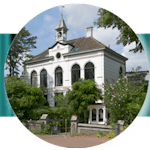 Huis Midwoud is the former town hall and school of Midwoud, now the house and concert hall of film concert pianist Yvo Verschoor. Yvo himself converted the house into a concert hall and screening place for film concerts and other small events. The former school houses a small Piano Museum.
Huis Midwoud presents concerts and / or lectures with a link to history at least twice a month. Film and music, literature, architecture and the rich history of the West Friesland region play an important role in this.
Translate content to English
We use cookies to ensure you get the best experience on our website.Read our Privacy Policy