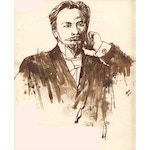 Club, society or other

The European Scriabin Society aims to raise awareness of the oeuvre of the Russian composer Aleksandr Nikolaevich Skriabin (January 6, 1872 - April 27, 1915), as well as to broaden attention to the ...

The European Scriabin Society aims to raise awareness of the oeuvre of the Russian composer Aleksandr Nikolaevich Skriabin (January 6, 1872 - April 27, 1915), as well as to broaden attention to the cultural backgrounds, place and time in which he lived and worked. . Lectures, lectures, concerts, festivals, etc. are organized for this purpose, as well as a bulletin issued. All this to promote studies on Scriabin and his time.
The Skrjabin Society was founded as an association in 1985 by Rolf Knap and Wim de Vries in Amsterdam. At the time of this cultural year of music, the association was founded and in the same year flourished in Amsterdam, so at the time the capital of music in Europe. And, in the Netherlands/Russia year in 2013, this association was converted into a European Foundation.
We are looking for a volunteer who is willing to organize a piano recital for us once a quarter in advance. We have a list of highly qualified Scriabin interpreters, from which we can recommend either Dutch or foreign pianists. In the latter case, financing of travel and subsistence must also be ensured. The financing of the musicians can usually be paid with the proceeds of the ticket sale after deduction of the costs.
Translate content to English
We use cookies to ensure you get the best experience on our website.Read our Privacy Policy